There has been a major change to the process this year only, which I was unaware of when I wrote this story. It appears that the traditional manager and coach voting is not being conducted in 2020. As a result, the SABR Defensive Index moves from 25% of the Gold Glove Award scoring to 100%. Here is the relevant paragraph from SABR.

“Due to the compressed 2020 MLB season, the Rawlings Gold Glove Award qualifications have been amended to rely solely on the SABR Defensive Index this year. The SDI draws on and aggregates two types of existing defensive metrics: those derived from batted ball location-based data and those collected from play-by-play accounts, including data from MLBAM’s Statcast, Sports Information Solutions, and STATS, LLC.”

Stepping back and thinking about it, this makes complete sense. Due to the truncated schedule, managers and coaches did not see the teams in the other two divisions of their respective leagues at all in 2020.

As is the case on an off-day during each World Series, the “finalists” for the annual Gold Glove Awards for defensive excellence are revealed by Rawlings. The 2020 announcement, made via a series of Twitter posts Thursday afternoon, consists of three players at each position in each league.

Though the actual winners are already known internally, this interim “finalist” step was included several years ago to build anticipation for the 2020 honorees, who will be disclosed on November 3.

Three St. Louis Cardinals have finished in the top three in the scoring at their respective positions. They are first baseman Paul Goldschmidt, second baseman Kolten Wong and left fielder Tyler O’Neill. The latter is a first-time “finalist”. Highlights of their respective candidacies are noted later in this article.

The team’s most decorated defender, nine-time Gold Glove Award selection and four-time Platinum Glove Award winner Yadier Molina, did not place among the top three NL catchers after taking the honors in 2018 and being a finalist last year.

Other Cardinals “finalists” in 2019 who did not make the cut this year are pitcher Jack Flaherty, shortstop Paul DeJong and center fielder Harrison Bader.

Historically, managers and coaches selected the Gold Glove Award winners, with embarrassing choices made at times. For example, a good hitter but average defender might earn the hardware, receiving the wrong award for the wrong reason. Other times a player who has a good reputation but played infrequently at the position that year was still voted in.

As advanced defensive metrics were developed and refined, more information on player defensive performance became available to all. Eventually, the SABR Defensive Index (SDI) was created in 2013 – with the blending together of five metrics given the importance of a 25 percent weighting in the Gold Glove Award selection process. Elevating the SDI essentially diluted the voters’ impact naming the annual winners.

In a normal year, interim SDI results are published and shared with the public periodically throughout the regular season though August. Of course, the SDIs are also available to the voters. Whether or not they are really used when ballots are cast, however, is another question entirely.

The interim SDI results are normally also there for us to use to gauge the validity of the “finalists” based on the metrics alone. However, in the shortened, condensed 2020, no partial SDI results have been released.

As a result, the metrics’ predictive power has been rendered far less effective this year.

For example, selecting the leaders in any one of the five metrics, such as the popular Defensive Runs Saved (DRS), or Ultimate Zone Rating (UZR), will not necessarily be indicative of the top SDI finishers, let alone the possible Gold Glove Award winners. Again, the five SDI metrics combined represent just 25% of the overall scoring.

The final SDIs are never disclosed until after the winners are made public in November. So in 2020, we cannot fully question any of the selections of “finalists” or winners until after the fact.

This year, the minimums for time played were 50 innings pitched or 265 innings in the field.

As a team, the 2020 Cardinals led MLB in Defensive Runs Saved (33), with the Los Angeles Dodgers and Cleveland Indians next closest at 29 each. In other words, St. Louis’ multiple finalists seem warranted.

O’Neill – Logged 9 DRS, which made him the top left-fielder in MLB and tied for the seventh-most by any player at any position in the game. In the National league, O’Neill is first among outfielders in Zone Rating (.978), tied for first in Fielding Percentage at 1.000 (no errors in 2020) and sixth in putouts per nine innings (2.33). 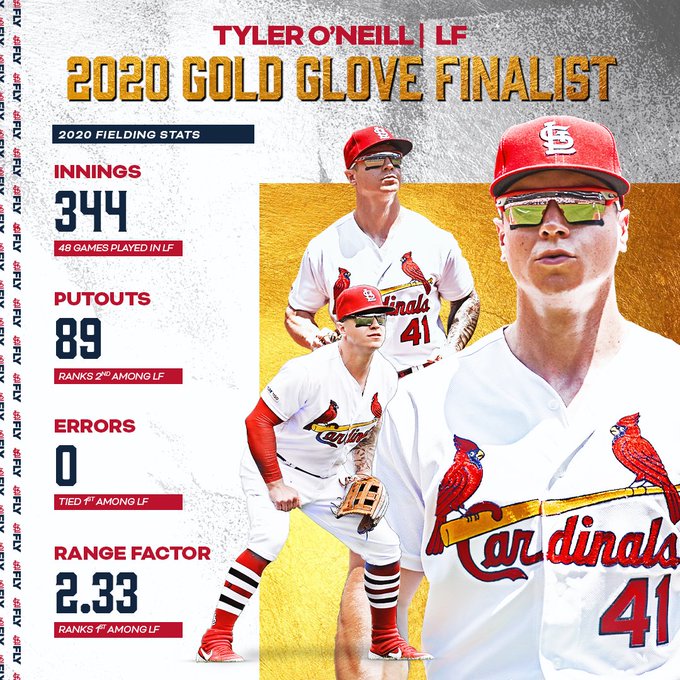 Wong – The second baseman was not far behind. His 7 DRS ranked second at his position in Major League Baseball. Wong led all National League second basemen in Zone Rating, double plays, assists, total chances and games played at the position. He totaled 39 more assists than the second place finisher. 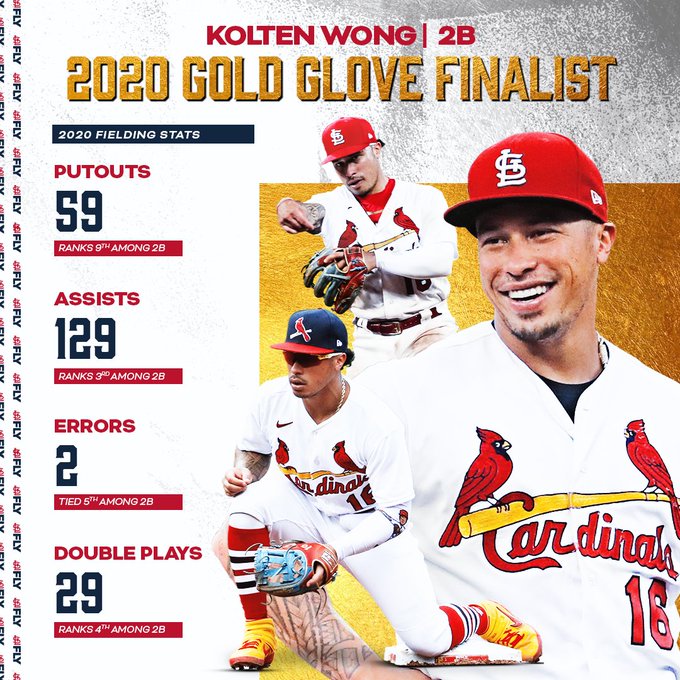 Goldschmidt – The three-time Gold Glove Award winner with Arizona (2013, 2015 and 2017) also won the Fielding Bible Award those same three years. In 2020, Goldschmidt ranked seventh among first baseman in putouts (383), was tied for 10th with 27 assists, tied for first with just one error in 2020 and his 41 double plays (many of which Wong also participated in) ranked third at his position. 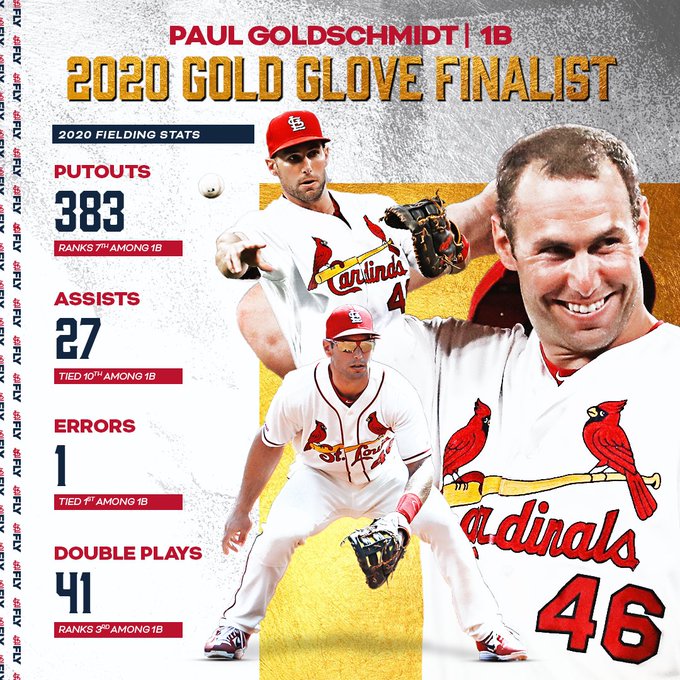 (hat tip to Cardinals media relations for these factoids)

Bader – Along with O’Neill and Tommy Edman, Bader was among the Cardinals shared leaders with 4 Outs Above Average, a Statcast measurement. Bader ranked second behind O’Neill in National League outfielder Zone Rating at .974. Bader’s two outfield assists tied him for fifth among NL center fielders.

However, the center fielder was in and out of the Cardinals lineup, starting just 36 games in 2020.

Molina – With the ironman playing the vast majority of the Cardinals’ innings behind the plate, the team collectively allowed just eight stolen bases this season. That was the fewest in MLB by huge margin, as the next closest was the White Sox with 16. Personally, Molina led NL catchers in Games Started (42) and Caught Stealing Percentage (54.5). He was second in NL Innings Caught (337 1/3) and tied for fourth in runners Caught Stealing (5).

The con to Molina’s record is that NL Central baserunners seem to be a bunch of plodders in comparison to the best of the East and the West. The Central’s best base stealer, Starling Marte, was traded by the Pirates out of the division for 2020, a year after Cincinnati speedster Billy Hamilton also moved on.

Of the top 24 basestealers in the NL in 2020, just one played the entire season in the Central Division. Shogo Akiyama of the Reds tied for 15th with seven steals.

In 2019, the Cardinals had six “finalists,” but only one winner. The six were pitcher Flaherty, catcher Molina, first baseman Goldschmidt, shortstop DeJong, center fielder Bader and second baseman Wong.

A year ago, I proposed a different approach to actually make these Gold Glove Award “finalists” meaningful.

There is plenty more of the kind of in-depth writing that you just read available here at The Cardinal Nation.